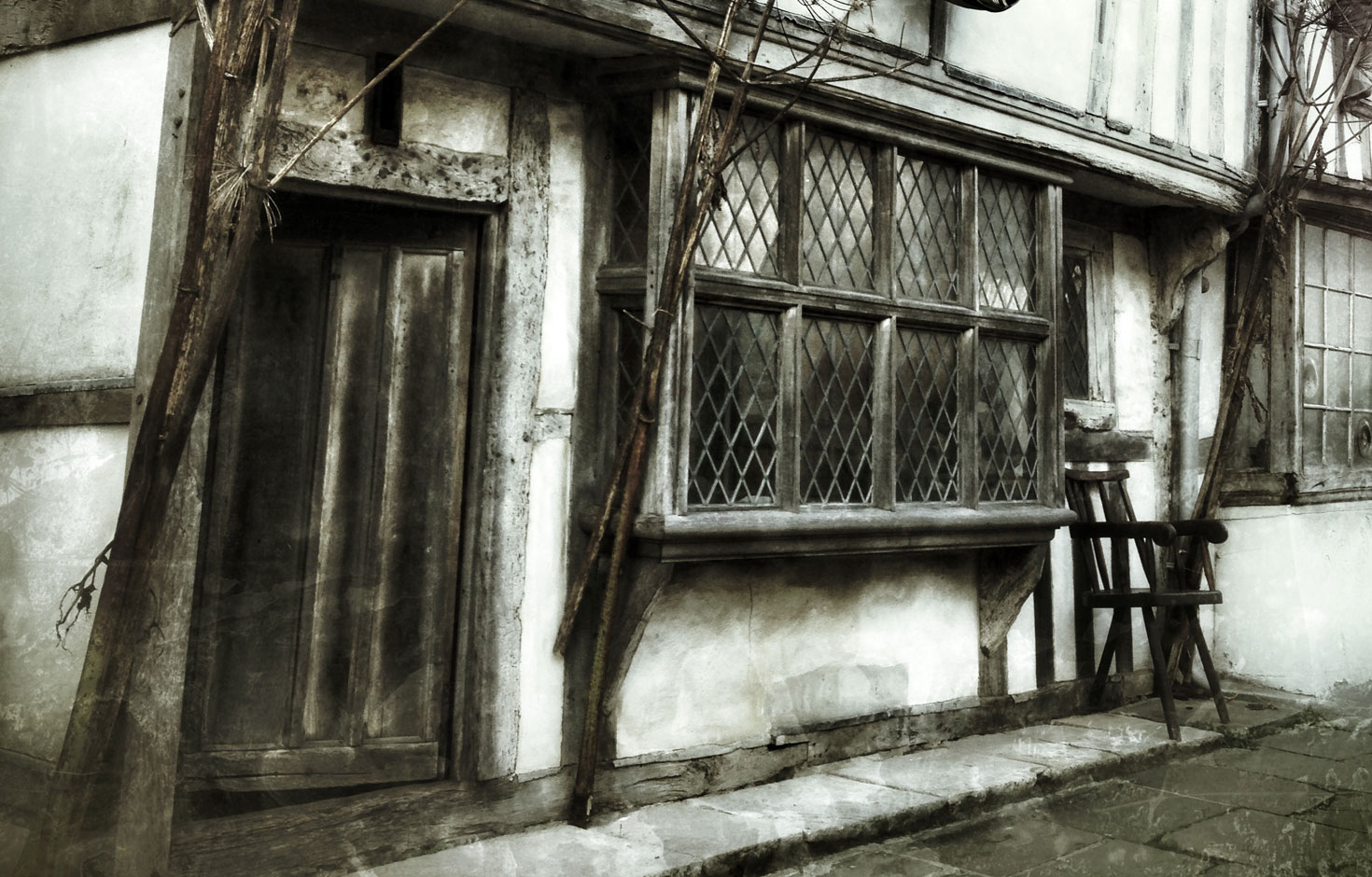 135 All Saints Street is a Grade II Listed 16th century merchant’s house, and one of the most intact and atmospheric Tudor houses in Hastings Old Town. Here, we answer your most-asked questions and explain how the house arrived at the way it looks today.

How big is the house?

The house is of two-bay construction and is deceptive in size when viewed from the front, as it has four levels and extends back deeply from the road. There are four upper rooms, a front parlour and middle parlour kitchen, and a double-height rear wing that houses a kitchen and a dining room in a semi-underground cellar. There is also a back yard with outdoor toilet and shower.

When was the house built?

There are two sections, which once were two separate dwellings. The main, front, building was constructed around the time of the Spanish Armada in 1588. The rear section (now the kitchen) is the older part of the building and was once a complete house. Its free-standing timber-frame is said to date from the 1400s – before Christopher Columbus sailed to the Americas. It is thought that it was dismantled from another site and erected where it now stands.

Why does the house lean?

Originally, the house did not stand at the end of a terrace, but was flanked both sides by properties built at the same time. The Tudor house that stood on the south side crumbled into its own cellar and the Victorians built next-door, leaving a twitten (a narrow footpath) in between. This left 135 with little support and its exposed south wall has been on the move ever since. Note how much it tilts out toward its upper floors. This caused major structural damage, and was not addressed until its second major life-saving restoration that was begun in 2006.

The house holds a wee dark secret, for up until the 1950s the rear wing was used as an undertaker’s workshop, cadavers being stored in the adjoining cellar room. Two elderly Hastings fisherman have recently recounted their memories about when as boys they would come to The Wilderness (as was this upper section of All Saints Street known then) and peer through the back windows of the house to spot the bodies laid out, then run away.

But does anyone live here now?

Yes. This is a private residence, owned and restored by Alastair Hendy, which he mainly occupies at weekends. It has central heating and electricity, so is perfectly habitable.

What was the house like when it was bought it in 2006?

Since there are few signs of modernisation or the trappings of more conventionally restored interiors, one would be forgiven for thinking that the house before its present incarnation was a neglected and antiquated wreck, a dilapidated home in need of some tender loving care. Far from it: the interior of 135 ended up like many other houses of this period, complete with fitted kitchen, carpet, modern bathroom suites, new floorboards, plaster-boarded walls and black-painted beams. In fact, it was a serviceable family home – but only on the surface, since major unaddressed structural problems were threatening its well-being.

How much of the house is restored?

The house you see now is the product of two major restoration programmes. The first, between 1974 and 1980, was carried out by Paul Lewis (of which more, below). A more recent programme by the current owner has taken the house back to how it may have looked when first built, carrying out major structural repairs throughout. Hendy has sympathetically restored every surface and internal fixture and reconstructed the evolution of the house as it might have happened when utilities, such as plumbing and lighting, first came into domestic use. This restoration has allowed it to breathe and, without trying to recreate a Tudor past, the rooms have been humbly furnished to reflect the character of the house. Hendy describes the result as “putting back the years, the years have taken away” and he has produced an environment quite unlike conventional ‘restored’ interiors. One visitor remarked, “It’s been done-up, but not ‘done-up’ ”. Quite.

How long did the recent restoration take?

Five years. It began in 2006, employing the skills of various of local craftsman, builders, metal workers, and carpentry and cabinet makers, and it carried on until 2011. For instance, new oak beams were cut and fashioned traditionally by hand using an adze; lead and copper nails used around sinks and to line one bath; and lath, horse hair and lime plaster was applied to walls. Floorboards and latch doors were constructed from groyne oak (the dismantled groynes from local beaches), weathered smooth and made more durable by years of impregnated salt. Salvage and reclamation yards, car boot and international antique fairs, even Ebay, all provided the source for many of the fixtures and fittings. Each was carefully selected to build a subtle environment that would sit comfortably with the plain fabric of the building. Plans, architectural drawings and building fabric samples were supplied at various stages to comply with conservation regulations.

Where did the furnishings come from?

The furniture is an eclectic mix of European pieces from all periods, providing a contemporary take on the past. For instance, there are 19th century Orkney chairs with rush backs that sit alongside English Georgian wingbacks in velvet, and an 18th century West Country settle with its original paint. An early Hungarian table shares space with various Romanian time-worn primitive dressers, stools and seats. A Dutch 18th century drop leaf table with silhouette legs shares a room with an Edwardian velvet sofa and Irish rush-woven chairs. In the kitchen and cellar dining room, there is a 20th century French aluminium-topped work table, a 1950s enamel refectory cooker and a cherry-wood French table.

What changes has the house lived through?

All Saints Street, once called Fish or Fisher Street, saw a downturn in its fortunes in the 19th century and, until the 1960s, it was inhabited by fisherman and the very poor. Apart from Georgian alterations to the exteriors of many of the properties, little happened to the interiors. However, growing wealth brings with it a desire for modernisation and this can be very destructive to old buildings. From the 1980s, when the street saw house prices start to increase, many of the properties succumbed to so-called improvement.

Happily, 135 escaped the building of extensions and destructive internal remodelling, with the bones of the building remaining substantially intact. Yet it has seen many changes throughout its life. The first came when fashion dictated a drastic change to the front elevation during the Georgian period which also saw the shape of the roof change radically (see below). The 20th century saw a host of modernisations, when different wall finishes and fireplace surrounds came into and out of fashion. The 1980s and 1990s saw rooms divided up to make way for en suite bathrooms, and the vogue for lighter spaces led to a plethora of roof-mounted Velux windows being installed. Ironically, some of its more insensitive alterations took place after it was listed and after the 1970s restoration, undoing some of the good work Lewis had carried out.

So how much of the frontage is original?

The timber arrangement of the front façade is of close vertical stud construction and the south-facing wall is small-panelled and is all original. The timbers on the south-facing wall and nearest the front door bear the carpenters marks. Originally the front elevation would have had a gabled roof extending over a jettied first floor window, similar to the adjacent houses. However, this was removed when the house was modernised in the 18th century. The Georgians despised Tudor style and ornamentation, and two highly carved barge boards that made up the gable were removed and, rather than discarded, were put to practical use and still exist on the house today. If you look up to where the guttering runs along the front, one of these richly carved and ornamented gables (this one once spanning the front of the house) is still just visible, yet now reversed and acting as a wall-plate to support the rafters. You will find the other decorative board in the top-floor bedroom of the house, again put to new purpose, this time as an intermediate collar to support the modified roof.

The two small light ovolo moulded windows that flank the central first floor window are original. These were covered up with wattle and daub during Georgian modernisation, and so, by happenstance, much of the glass had been preserved. These are the only original windows to survive. Their fine diamond lead-work and coloured glass provided a template for the all the windows that were reinstated during the 1970s restoration, when Lewis removed all the Georgian and Victorian sash windows.

What else happened to the house during the 1974 restoration?

When Lewis bought the property in 1974, he set about “de-Georgianising” it, putting back the frontage you see today. He removed the Georgian brickwork that was built at ground level up to the first floor jetty, along with all the external render that was suffocating the property, to reveal the wall as it now is, with stud work and elaborately-carved wooden brackets. Then, after researching drawings of the house and street as it once stood, he reinstated the ground floor front diamond mullion oriel window along with the front door. Until 1974, the front door was sited down a side passage on the right-hand side of the property – it opened into what is now the middle parlour kitchen off an internal twitten, which then provided public access through the houses. Lewis had found evidence – from notches cut into the beams – that the front door was originally situated on the left-hand side, and so he put it back where it is today. The twitten was blocked off, the house frontage faced with a small leaded window and close vertical studwork (where the entrance to the twitten once stood), and the front room was extended back to its original sixteenth century proportions.